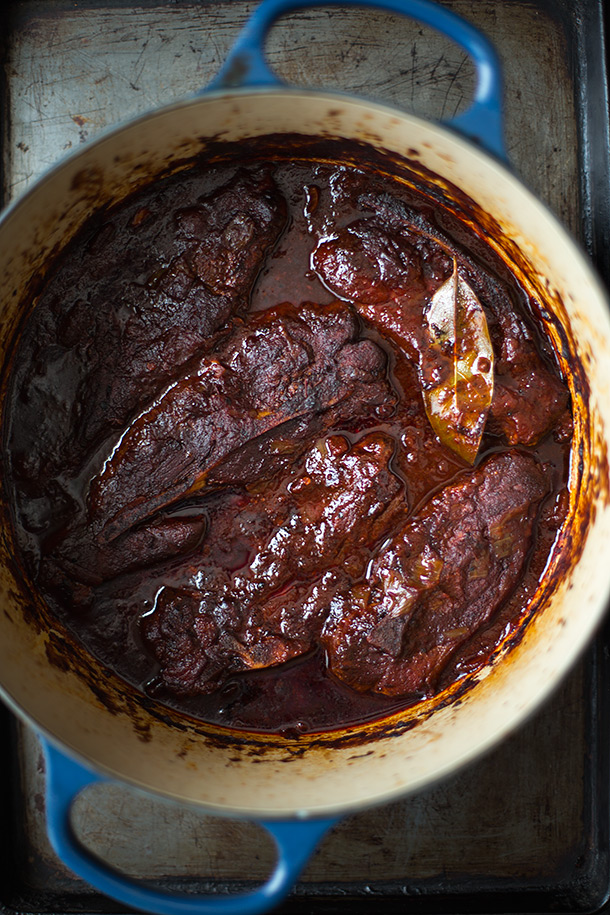 I frequently find myself looking for different ways to prepare meats. Sometimes it’s as simple as trying a different cooking method with a frequently used cut but recently I have been looking for cuts of meat that I’ve never even cooked before.  Cuts like liver, heart, hocks, feet, neck; pretty much as weird as I can possibly get it. Mainly because I don’t really view it as unusual, instead I view it as just another part of the animal. And as far as I’ve experienced, there is no “bad” part of the animal. 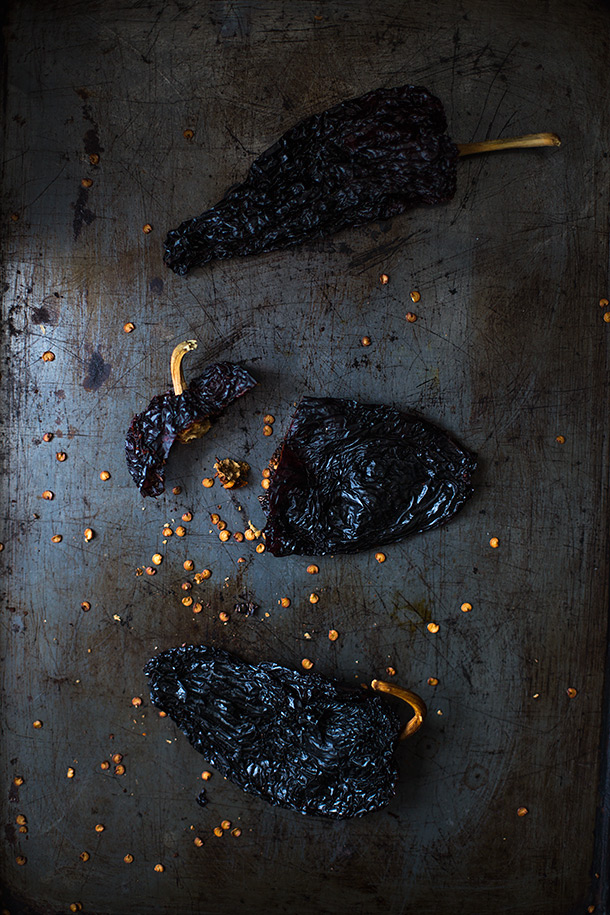 Since I was searching for any cut with a name that I couldn’t recognize on my go to local farm Yonder Way’s order form, I often skimmed over and ignored any of the cuts with words that I recognized like “ribs”. Unfortunately, because of that, I was passing up Country Style ribs under the pork section for months on end. Finally after missing this wonderful cut so many times my eyes locked with the name, noticing that it didn’t have wording for ribs that I was familiar with. 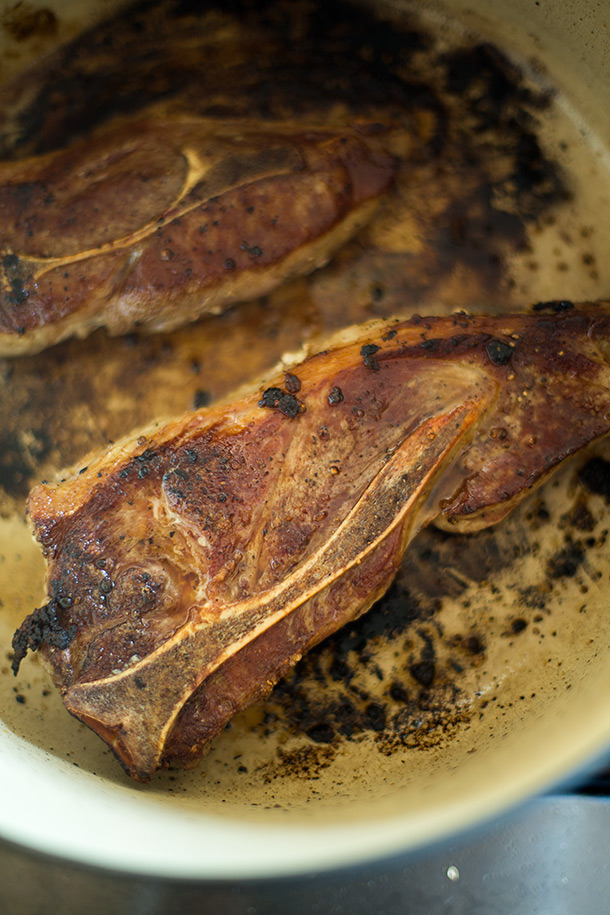 Of course I did my google research and ordered them right away; because, well ribs. I’m gonna be completely honest, this cut of pork may not have necessarily met my standard on the weirdness scale but I did fall in love with a cut that I wouldn’t have expected to fall in love with. It’s got a fair marbling of fat so the flavor is wonderful. There are also a variety of sections to the cut that give you a plethora of textures to eat through as you enjoy your meal. Ranging from tender to completely melt in your mouth consistency. 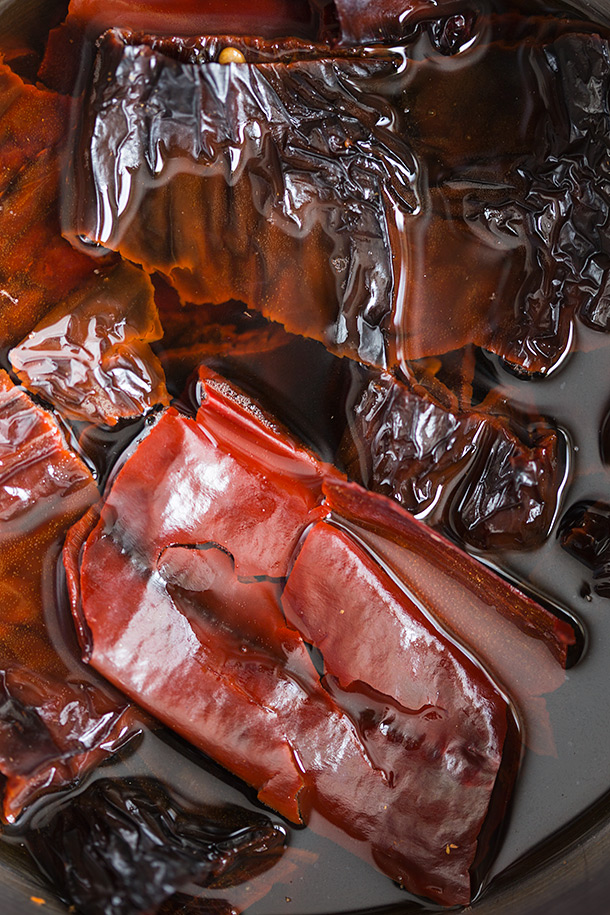 I guess there is a good reason those are my friend Jason’s favorite cut.  He calls them the Farmers cut, and with good sense I agree with that notion. Especially since I slowly braised them and then finished them with a layer of sauce on top to caramelize to an intoxicating stickiness full of umami heaven. Despite the fact I went all out on flavor for this recipe, he mentioned that this cut can do a number of things other than being braised, even simply cooking them like a pork chop could have some promising results, but I’ll have to report back with anything like that. In the mean time I prefer to cozy up to warming recipes like this one, especially with the way the weather has decided to behave lately. 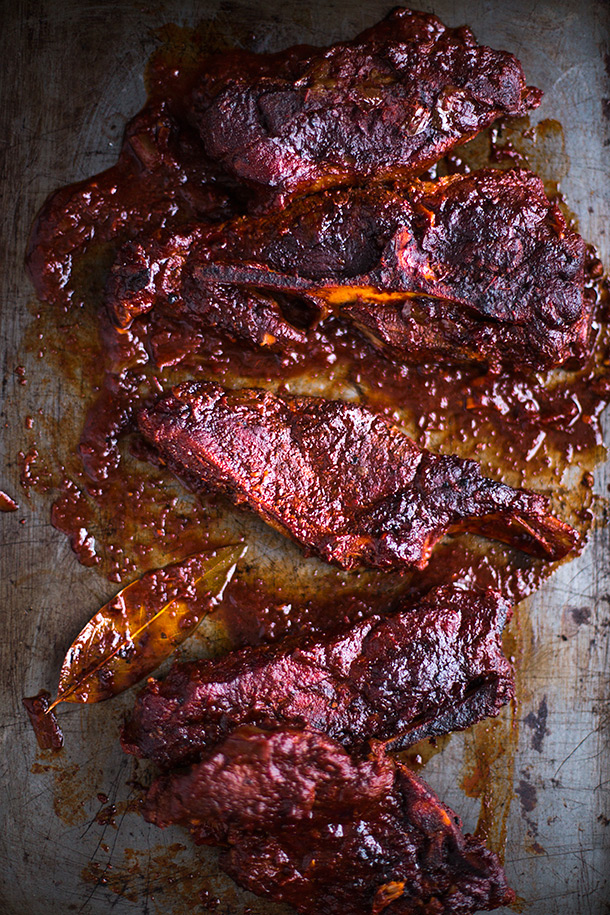 5.0 from 2 reviews
Ancho Chile Braised Country Style Pork Ribs
Print
Prep time
30 mins
Cook time
1 hour 35 mins
Total time
2 hours 5 mins
Country style pork ribs braised in a sweet, piquant and smoky ancho chile sauce to irresistible sticky tenderness. First the ribs are braised in the ancho chile sauce and then in the final stages of cooking are finished with a layer of the sauce to caramelize on top of the ribs giving them an sticky umami packed layer of flavor on top of the ribs.
Serves: 5
Ingredients
Spice Mix:
Instructions
Notes
These are not spicy at all, ancho chiles are incredibly mild and are more of a sweeter pepper than spicy. Even my mom loved them and didn't think they were spicy, which is saying something. Lastly, don't be daunted by the list of ingredients, many of these ingredients you likely already have and you can find dried chilies at pretty much any local grocery store.
Make-ahead Note: These can absolutely be made ahead, in fact they can be made up to 2 day in advance and then refrigerated. Simply make them ahead as instructed but skip removing the part where you remove the lid and increase the heat as you will do this when yore ready to serve them. Once you've made them, place them in a baking dish along with all of the braising liquid, cover them with foil and refrigerate them. Once you're ready to serve skim off any hardened fat on the top of the sauce (there should be little to none so you don't really have to worry about this), then preheat the oven to 375 and place them in the oven covered with foil for 15-20 minutes or until hot and bubbly then remove the foil, flip them with tongs being careful not to tear the meat and baste each rib with the sauce, then broil them on high for 3-4 minutes or until the sauce is caramelized on top and serve.
Serving Note: If you don't know what to serve with these, they go wonderfully with my cauliflower tortillas, vegetables, on top of cauliflower rice or white rice. The possibilities are limitless with these.
3.2.2265